The philosophy of Limas House

Do you know that an Indonesian banknote for 10,000 rupiah of 2005 and 2010 emmission group shows “Limas” house ,the traditional house of Palembang? This house is located in Balaputra Dewa Museum complex, Srijaya street I no. 288 Km 5,5 Palembang.

Limas house is a traditional house of South Sumatra Province. It is called “Limas” because it is pyramid-shaped. It is a terraced house and its level has its own cultural philosophy. These levels are called “Bengkilas” by the local community.
The construction of Limas House is influenced by the strong values of the local custom.

The terraces of the house consist of five rooms called “Kekijing”. It symbolizes the five stages of life in the society, age, gender, talent, degree, and dignity. The Details of each terrace has its own uniqueness.
There is an interesting thing in this house. We can see a love scale. This scale is wrapped in red Songket cloth. It used to be used by the noble in traditional wedding rituals. So, there are so many customs of Palembang culture we can learn in this Limas House. Are you interested in knowing more about it? Let’s visit Palembang. 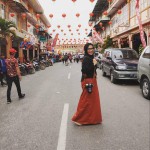